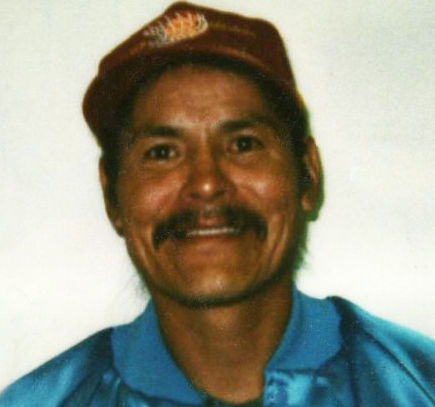 Alvin Adakai, 62, passed on May 17, 2020 in Gallup, NM. He was the father to his twin girls and had a great love for his community and people. Alvin spoke the traditional Navajo language fluently and proficiently. He was the son of Fred and Lenita Adakai of Manuelito, New Mexico. Alvin was born March 4, 1958 as the eleventh child of thirteen. He was born into the Bitter Water Clan and for the Mexican People Clan.Alvin was raised in Manuelito and attended the Indian boarding school in Thoreau, NM until high school where he ran track and field and played football at Gallup High School. Alvin graduated from High School in 1976 and went on to attend Haskell Indian Nations University, formerly known as Haskell Indian Junior College, where he obtained his Associates in Liberal Arts in 1986. He returned to Manuelito and worked as a Chapter Manager from 1988 to 1994. He believed in obtaining an education and instilled this importance in his girls.  Alvin is survived by his twin daughters Elvina Lynn Adakai and Delvina Dee Adakai both of Albuquerque, NM and three grandchildren. He is survived by siblings Frank Adakai (Albuquerque, NM), Rose Lynn Austin (Cortez, CO), Bessie Johnson (Garland, TX), Patrick Adakai (Tijeras, NM), Pauline Myers (Farmington, NM), Justin Adakai and Paul Adakai (Manuelito, NM).Alvin is preceded in death by his parents Fred Adakai, Lenita Adakai, sisters: Stella Adakai, Louise Adakai-Lucero, Anita Adakai, Anna Mae Aarseth, and brother Jerry Reeves Adakai.He was a very generous, respectful, considerate, and thoughtful individual. The Manuelito community people remember all the positive achievements he accomplished for his people.Gabaldon Mortuary in Albuquerque, NM has charge of his arrangements. The family will receive family and friends at a later date.

To order memorial trees or send flowers to the family in memory of Alvin Adakai, please visit our flower store.