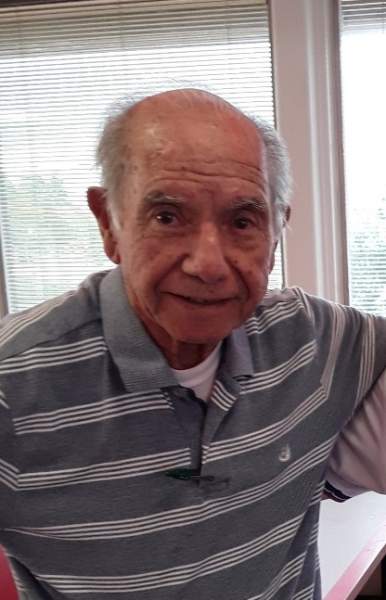 David E. Sedillo age 86, passed away on October 9, 2021, at home with family in Albuquerque, New Mexico.  David was born November 25, 1934, in “Sanjo” San Jose to Solomon and Anita Sedillo at the family home on John St. S.E. He grew up with twelve siblings, brothers, Abel, Gillie, Barney and Sal, sisters Priscilla, Julia, Carolina, Mary, Frances, and Lucille. All have since passed away except for Sal. Grandpa Solomon planted a large “huerta” and had animals to feed his large family. He and Grandma Anita worked hard to raise twelve kids. Uncles, Abel and Gillie went off to war and so Tio David was stuck with “escardando” (weeding) and helping with the farm. “Escardando” was not something he liked, so the first chance he got he quit school and headed to the Air Force where he served his country proudly for four years. When he was honorably discharged, he came back home for a while, but was enjoying “La Perrada” (his dawgs) at The Tropics and the South End way too much. He decided to better himself and head west. He earned his G.E.D. in the military and enrolled in electronics school in Los Angeles where he ended up working for Lockheed Martin. He quickly climbed up the ladder and was a very successful engineer and writer for the next thirty years of his life. Along the way, he invested in real estate in the Burbank, California area and met the love of his life Ida Mae. Together they worked and built quite a nice portfolio that included a house in Maui and real estate in Burbank. They owned a liquor store which Mae ran and was quite successful. Next on the agenda from Lockheed Martin was to send Tio David to Germany to write books from English to German. He and Mae traveled throughout Europe and brought back many antiques and collectables. Upon returning to L.A., Tio David came back to staff over two-hundred and fifty employees with Lockheed. Not bad for the “Sanjo kid” He was a brilliant man. In the 90’s, retirement came and Tio David longed to come back to “Burque” and retire here. He finally convinced Aunt Mae to move, and they settled to retirement in the Tanoan Community. Between golf and weekend dancing at Epi’s on the westside, they were enjoying retirement until 2001 when Aunt Mae was struck by a crippling stroke that left her bedridden for the next fifteen years. Tio David remained by her side day and night and never left her, keeping her at home until she passed in 2015. Tio David was a kind and caring husband, uncle and brother who loved his family dearly. He loved his drinks, entertaining and loved to dance. He loved his 4:00 p.m. Martini and was a pet lover as well. Rest in peace Tio David. We would like to thank his caretakers who remained with Tio until the very end. Marty, David, Michael, Sonia, and Adan. A visitation will be held on Monday, October 25, 2021, at 10:30 a.m. at San Jose Catholic Church 2401 Broadway SE. with Mass of Christian Burial at 11:00 a.m. A committal service with military honors will take place following the Mass at Mt. Calvary Cemetery 1400 Edith Blvd N.E.

To order memorial trees or send flowers to the family in memory of David Sedillo, please visit our flower store.