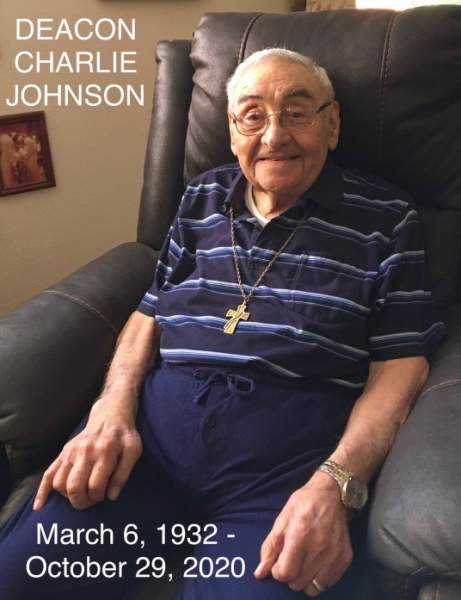 Deacon Charles (Charlie) Victor Johnson 03/06/1932 – 10/29/2020.  Deacon Charlie Johnson passed peacefully into eternity at home early Thursday morning, October 29, 2020 at the age of 88.  He led a life filled with faith, and he brought joy to all who knew him.  He loved singing, playing the guitar, watching football, telling jokes, sharing his faith, and spending time with his family, friends, and especially with his grandchildren.  He treated anyone who crossed the threshold of his home as though they were family.  He was born and raised in Alamogordo NM and after serving with the National Guard, he moved to Albuquerque where he met and married his wife Marcella Mondragón. Deacon Charlie was a Third Order Franciscan and a lifelong member of the Legion of Mary, which he also served as spiritual director for the Archdiocese of Santa Fe for several years.  He was ordained to the Deaconate on June 7, 1987, serving at Our Lady of the Most Holy Rosary Catholic Church until he was assigned to San Ignacio Catholic Church as the Parish Life Coordinator from December 2004 through March of 2009, at which time he retired.

A virtual gathering in his memory will be held on Sunday, November 1, 2020 on Zoom from 4:30pm to 6:30pm Mountain Time (remember to change your clocks!) with a Rosary beginning at 5:00pm. The funeral Mass will be celebrated for Deacon Charlie with immediate family only at Our Lady of the Most Holy Rosary Catholic Church, live streamed for all others to accompany the family at 10:30am Mountain Time on Monday, November 2, 2020, Abbot Joel Garner, O. Praem presiding.  Pall bearers are Michael Johnson, Kenneth Johnson, John Johnson, Timothy Johnson, Joshua Johnson, and Dominic Johnson.

A most gracious and heartfelt thank you to all who have expressed their sympathy and support to the family and who have offered prayers for Deacon Charlie and his family. To his son John and his family who cared for him for so many years, and to his daughter Laura Flynn and her family, all of the doctors, physical, occupational, and speech therapists, hospice nurses, social workers, health aides, and chaplains who took such wonderful care of him in his last months, our family is forever grateful to you for the exceptional love and care that you gave him!  Thank you also to Abbot Joel P. Garner, O. Praem, and Msgr. Bennett J. Voorhies for taking care of his spiritual needs in his last days!  We, Deacon Charlie’s family, greatly appreciate everything you all have done for him and for us! May God bless you all!

To order memorial trees or send flowers to the family in memory of Deacon Charlie Johnson, please visit our flower store.