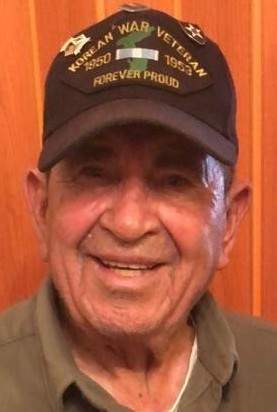 Eugenio ”Gene” Necomedes Archuleta proud husband, father, grandfather, great-grandfather, and great-great-grandfather passed away on December 20 at the age of 91. He was preceded in death by his parents Necomedes and Santanita Archuleta, brothers Benjamin, Daniel, Michael, Guillermo “Willie”, and Abenicio Archuleta, sisters Rayos and Cecilia Padilla, and sons Rudy Archuleta, Chris Lopez, and Leroy Casaus. Gene is now fully healed and resting peacefully in the loving arms of our Savior.

Gene was a native New Mexican, born in Llaves and eventually moved to Albuquerque, but he loved to travel and got to see many new places. He served bravely for our country in the United States Army as a Corporal in the 2nd Infantry Division Field Artillery in the Korean War, and also served in the Army National Guard. He loved to share his stories with his kids and grandchildren. He worked hard to provide for his family, and was always first to help friends and neighbors in need. Gene had a servant’s heart, and volunteered for many jobs to support his community. He is survived by his wife Matilda, children Rebecca Martinez(Augie), Gene Archuleta (Veronica), Mike Archuleta (Mariana), Donna Torrez (Gilbert), Carlos Casaus (Rosa Maria), Yolanda Archuleta (Mel), Cathy Casaus, Wanda Martinez (Fernando), JoAnn Casaus (Brian), Mario Archuleta (Amanda), sister Mena Medina, and many grandchildren, great-grandchildren, great-great-grandchildren, nieces and nephews, extended family and friends.

To order memorial trees or send flowers to the family in memory of Eugenio Necomedes Archuleta, please visit our flower store.