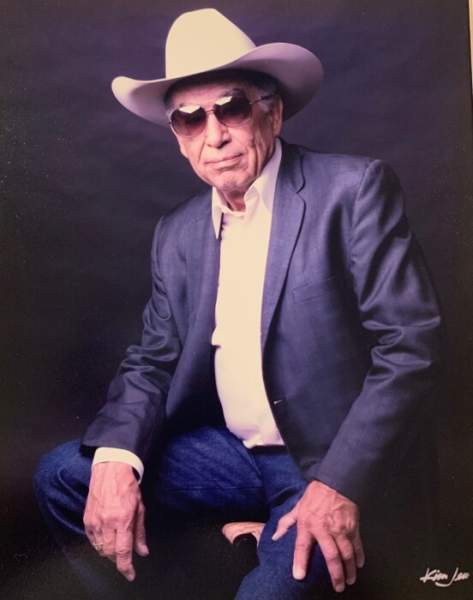 Ivan Seferino Benavidez Sr, Age 81, passed away at his home in Albuquerque, NM on November, 1, 2020.  He was born on February 13, 1939 to Benjamin Benavidez Sr and Erlinda (Anaya) Benavidez.  Ivan attended St Mary’s school with many lifelong friends.  Raised on the family ranch, Ivan continued the family traditions as a cattle rancher throughout his life on the Benavidez Ranch.  Within his own success, his greatest pride and joy still came from the success and happiness of his children and grandchildren.  He is survived by his children, Ivan Benavidez Jr. and wife, Dominque, Leona Ann Benavidez, Raquel Benavidez, Lee Ross Benavidez; eight grandchildren; three great grandchildren; sister, Rebecca Carrillo; many cousins and friends  some of his favorite times were out dancing with family and friends where his laughter would carry, drinks would flow and he would begin to tilt his hat as the good times would roll. He will be remembered as a deeply respected man, who had a way of making everyone feel special, a laugh that was contagious and a will to live like no other. A rosary will be recited at 230pm on Friday, November 13, 2020, in the Gabaldon memorial Chapel, 1000 Old Coors Dr SW. With a Funeral Services to follow at 3:00pm. Private disposition will take place at a later date. Due to the State of New Mexico COVID-19 mandates the service is restricted to the immediate only that can attend. The family of Mr. Benavidez have arranged for all those to join them in a virtual gathering in his memory, it will be held on Friday, November 13, 2020 starting at 2:50pm. Please click on link below;

To order memorial trees or send flowers to the family in memory of Ivan Benavidez Sr., please visit our flower store.