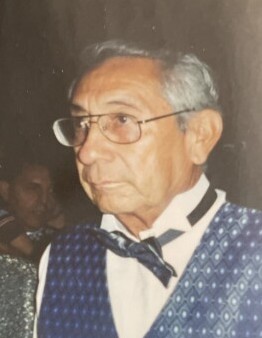 Jose Meliton Vigil, age 82, more familiarly known as Mel, passed away peacefully surrounded by family and prayer on April 23rd 2021. Mel served in the Navy proudly for 9 years abroad the USS F. D. Roosevelt. He was proceeded in death by his father Enrique Vigil, mother Felipita Vigil; brothers, Felix Vigil, and Orlando Vigil; son, Raymond Granado. He leaves behind four sisters, Betty Trujillo and husband Steve Trujillo of Taos, Mary Vigil, Victoria Valerio of Utah, Helen Sanistevan of Utah as well as his Two brothers, Henry Vigil, and Billy Vigil. Mel will watch over his wife of 48 years Margaret Granado-Vigil, Three sons Arthur Granado, Edward Granado, and Gilbert Granado of Amarillo, as well as his Five daughters, Felipa Coon and her spouse Michael, Sonya Avila with her spouse Martin, Alexis Marquez and her spouse E.J. of Los Lunas, Victoria Granado-Vigil and Partner David Chavez, and Reina Granado-Vigil. He was blessed with eight-grandchildren Twenty-Four-great-grandchildren, as well as many special nieces and nephews. Mel was admired and loved by those around him, he will be deeply missed. A Visitation for Mel will be held Friday, April 30, 2021 at 2:00pm in The Gabaldon Memorial Chapel located at 1000 Old Coors Drive SW 87121. A Rosary will be at 3:00pm, with a Funeral Service to follow at 3:30pm. A Committal Service will take place at Santa Fe National Cemetery date and times still pending Pallbears will be Shelby Granado, Brandon Granado, Steve Trujillo, E.J Marquez, David Chavez, Arthur Romo.

To order memorial trees or send flowers to the family in memory of Jose Vigil, please visit our flower store.