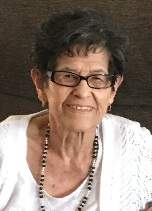 Kella Herrera, age 97, born May 13, 1923 in Kelly, New Mexico and a resident of Albuquerque, passed away on July 31, 2020.  She is survived by her son Larry Herrera and wife Rose; Two Grandchildren; Matthew and Teresa Herrera; Many nephews, nieces, cousins and friends. Mrs. Hererra was preceded in death by her husband, Marcos Herrera; son, Patrick Herrera; grandson, Andrew Paul Herrera; and her seven brothers and sisters. Mrs. Herrera served as an educator to the children of Albuquerque at APS for twenty-five years. A visitation will be held on Thursday, August 6, 2020 at 6:30 p.m. in the Gabaldon Memorial Chapel 1000 Old Coors Dr. S.W. with a Rosary to be recited at 7:00p.m. A Mass of Christian burial to be celebrated Friday, August 7, 2020 at 9:00 a.m. at Holy Family Catholic church 562 Atrisco Dr. S.W.  Interment will follow Mass at Gate of Heaven Cemetery 7999 Wyoming Blvd NE.  Pallbearers will be Ernest Torres, Michael Saavedra, Joseph Saavedra, Ronald Saavedra, Ronald Jaramillo, Matthew Herrera.

To order memorial trees or send flowers to the family in memory of Kella Herrera, please visit our flower store.