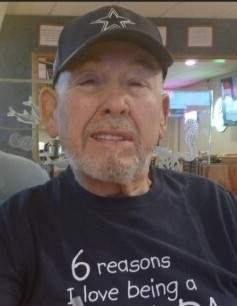 Peter Policarpio Armijo, age 72, peacefully passed away on February 27, 2021. He was born in Albuquerque, NM on August 18, 1948. Peter is preceded in death by his parents, Antonia (Tonia) and Poles Policarpio Armijo, as well as his grandson, Eli Armijo Olguin. Peter is survived by his loving wife, Lugardita (Lugie) Armijo, daughters Stacie Armijo and Valerie (and husband Ryan) Torres, his grandchildren Nicole, Caitlyn, Tristan, Richard and Alyssa, as well as his sisters Bertha Denman, Mona Gutierrez and Frances Armijo. Peter also leaves behind a large extended family and a large group of friends he has made throughout his life.

Peter graduated from Albuquerque High School in 1965 and enjoyed planning the class reunions. Peter worked for the City of Albuquerque as a city inspector, later starting his own business as an inspector. Peter was a diehard Dallas Cowboys fan never loosing faith in America’s Team.

Peter’s favorite pastime was spending time with his grandchildren. From babysitting to teaching the children how to cook/bake, Peter would go out of his way to ensure that every wish any of the grandchildren made was fulfilled. He was truly in his heaven when he was around his grandchildren.

Peter will truly be missed. We will all see him again in the next life.

Mass/ Rosary will be scheduled at a later date due to current restrictions. In lieu of flowers, prayers for the family are requested.

To order memorial trees or send flowers to the family in memory of Policarpio Armijo, please visit our flower store.