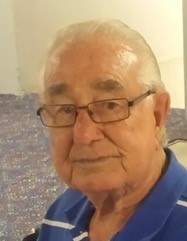 Ramon Herrera, an Atrisco Land Grant heir, passed away on September 7, 2020. He
was born on June 21, 1927 to Mariano & Quirina Herrera. Ramon was preceded in
death by his wife Grace and brothers Jose,Eloy, Mariano, Avelino, Nestor Herrera &
sister Lucinda Baca.
He is survived by: daughters Patricia, Geneva, Nancy(Ruben) ,Donna and son Ramon
Jr.(Brenda); grandchildren Adrienne(Jeremy), Christine, Staci(Jeff), Joe(Connie),
Leticia(Steve), Ian(Kim), Raymond, Jolene(Dominic); great grandchildren Ethan, Logan,
Dylan, Cianna, Emma, Roslynn; sister Carolina Herrera & many nieces , nephews and
cousins.
Ramon peacefully passed away surrounded by his family. He was looking forward to
being reunited with his beloved wife Grace who he lost 13 years ago, now they can
dance and enjoy being together again.
The word stranger did not exist in Ramon’s vocabulary. He loved meeting people where
ever he went.
He made many friends by engaging them in conversation. As our family receives
condolences from family & friends, the words special & unforgettable are frequently
used to describe him. He’d celebrate with others as well as visit the sick & console the
bereaved. He believed a short visit or a phone call would help those who were grieving
or ill.
He retired from the City of Albuquerque after 33 years of service. After retirement he &
Grace joyfully watched their grandchildren. They taught them how to garden & grow
chile & other vegetables which they then shared with neighbors & friends. They taught
their grandchildren to work hard, share what you have , help others and to have fun.
Ramon lived a humble life and touched so many lives with his zest for life.
Special appreciation & gratitude to son-in-law Ruben Abeyta. Ruben was by Ramon’s
side throughout his last years. They were best buddies. Thank you Ruben for loving and
caring for Ramon.
He adored you.

Services are pending and will be announced at a later date.

To order memorial trees or send flowers to the family in memory of Ramon Herrera, please visit our flower store.